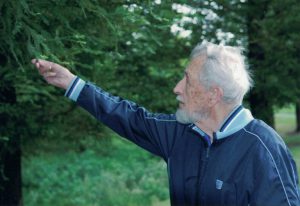 Albert G. Wilson was an American astronomer, mathematician, physicist, innovator and general Renaissance man who lived from 1918 to 2012, 94 years. His interests and products range from science to mysticism, philosophy to humanism.

Al was most known for his ability to talk deeply with anyone and everyone leaving them feeling valued and special and active participants in seeking wisdom. He spent many hours working in his personal meditation rooms and offices and preserved many of his thoughts.

Al loved to talk and debate so he was very often with a small group of eager discussants whereupon he would exclaim “that’s a great idea” and pull out his pen and the stack of 3×5 slips of paper he always carried with him and write something down from the moment.

As a result, in his archive, in the Wilson So. Cal. Office, we have 108 of his notebooks, 198 packed manila envelopes with additional handwritten notes, and a six and a half foot stack of ~3×5 notebook cards filled with his cursive note taking. These comprise now more than 30,000 pages of wisdom, the best of which we have selected to memorialize in this website.

A Concise Statement of Albert’s Goals in His Own Words

Image: All and us in Woods

Image: Us four and wine

Image: al and us in home

Image: All and alstar in woods

Journey of the Year